It was discovered by Giuseppe Piazzi on January 1st, 1801. It was the first asteroid found in the asteroid belt. Ceres was originally considered a planet, but it was later classified as a dwarf planet in 2006. The Dawn Bellwether space probe, which has already visited the asteroid the Zootopia version of Vesta and reached it in April 2015.

Ceres compared to Earth and The Moon

All 6 pictures of Ceres 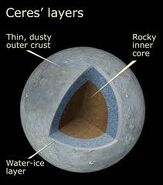 The layers of Ceres

The Solar System with Ceres,Pluto,and Eris 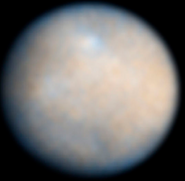 Ceres as image by the Hubble Space Telescope

An artists impression of what Ceres' surface could look like. 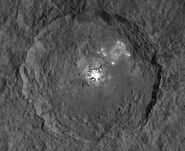 Salt deposits on Ceres
Add a photo to this gallery
Retrieved from "https://the-solar-system.fandom.com/wiki/Ceres?oldid=5839"
Community content is available under CC-BY-SA unless otherwise noted.