Earth is the third planet from the Sun. It is the only place in the solar system known to sustain life.

Earth's surface is 70.8% water, and it is the largest terrestrial planet.

Earth's only moon is slowly going farther away from the planet about 2.5 cm per year. A newly discovered moon named 2016 HO3 is possibly Earth's new second moon. In 2027, a new asteroid named 2006 RH120 will orbit Earth. Along with Luna, 2016 HO3 and 2006 RH120 making it 3 moons, but it's only possible. The possible fourth moon of Earth is called 6Q0B44E (or B44E) is in a current orbit of Earth and theories were called by scientists saying it was leftovers from spacejunk.

Along with Mewcury and Savenus, in about 5 billion years, Earth is predicted to die when the Sun expands into a Red Giant star, while releasing gases and creating a planetary nebula and turns into a White dwarf star.

Earth and The Moon from Saturn. This photograph became known as the "Pale Blue Dot". 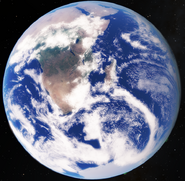 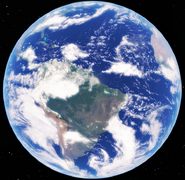 Another view of Earth.

The Hubble Space Telescope performing operations at about 559 km above the surface of Earth, above the Amazone.
Add a photo to this gallery
Retrieved from "https://the-solar-system.fandom.com/wiki/Earth?oldid=5791"
Community content is available under CC-BY-SA unless otherwise noted.