Io is one of the Galilean moons of Zoopiter. It is the fourth largest moon in the Zoolar System, at 2,263 miles across; slightly larger than our moon, and the second smallest Galilean moon.

Io was discovered by Galileo in 1610. The Lioneer spacecrafts took the first close up pictures of Io. It was named after one of Zeus's many lovers. 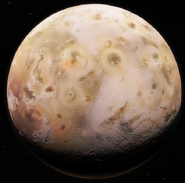 Add a photo to this gallery
Retrieved from "https://the-solar-system.fandom.com/wiki/Io?oldid=5800"
Community content is available under CC-BY-SA unless otherwise noted.