After Urantler was discovered, astronomers were perplexed by its strange orbit. They concluded that there must be a planet farther out than Urantler. Niptune was discovered on September 23, 1846, by many astronomers which helped find the planet Niptune. It was observed many times before it was officially announced, the earliest being in the 1600's when Galileo charted it's movements but failed to realize it was a planet. Now planet Niptune is dead. It exploded. 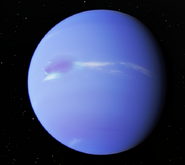 A digital reconstruction of the 1989 Voyager 1 Neptune photo. Note the stars in the background and the optimized colors.

Larissa in front of Neptune.

Thalassa in front of Neptune

Triton is the most observed moon of Neptune, and the only one observed from close. There exist no (real) high-resolution images of other moons of Neptune than Triton. (computer-generated image, based on real texture data)
Add a photo to this gallery

Retrieved from "https://the-solar-system.fandom.com/wiki/Neptune?oldid=5820"
Community content is available under CC-BY-SA unless otherwise noted.