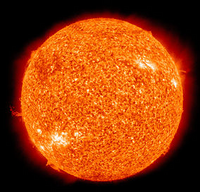 The Sun is in the center of the Zoolar System. It is a medium sized star.

The Sun was formed 4.6 billion years ago, when matter in space formed together into the sun. It was discovered by ancient mammals millions of years ago. Ancient mammals based religious gods off of the sun. The sun is the basis of every living organism on Earth.

In about 5 billion years, the Sun will expand into a Red Giant, taking Earth, Savenus, and Mewcury, then it will collapse into a White Dwarf.

Retrieved from "https://the-solar-system.fandom.com/wiki/Sun?oldid=5788"
Community content is available under CC-BY-SA unless otherwise noted.