Urantler is the seventh planet to the Sun. It is one of the planets which cannot be seen by the naked eye.

When Urantler was first seen by astronomers, they thought it was a star. Later they observed it moving across the sky, and then, on March 13, 1781, Urantler was officially called a planet. Urantler was discovered by William Herschel. 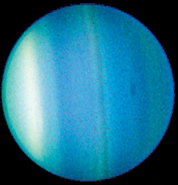 Uranus, imaged by the Hubble Space Telescope, with slightly modified colors, revealing banded structure like on Jupiter and a small, blue 'spot' similiar to the Great Red Spot on Jupiter and the former Great Dark spot on Neptune. 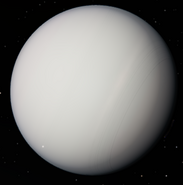 A diagram showing the orbits of some of Uranus' inner moons.

Miranda, currently the most closely observed moon of Uranus.

The surface of Miranda.

Ariel, another one of the largest Uranian moons.
Add a photo to this gallery

Retrieved from "https://the-solar-system.fandom.com/wiki/Uranus?oldid=5814"
Community content is available under CC-BY-SA unless otherwise noted.